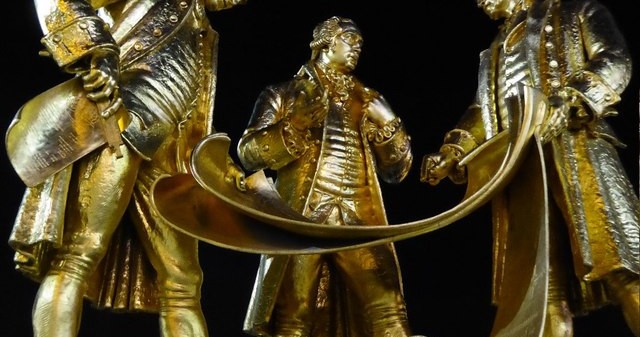 The year 2019 marks the bicentenary of Scottish scientist, engineer and inventor James Watt’s death and the 250th anniversary of Watt patenting his most famous innovation, the separate condenser. Though Watt did not invent the steam engine, his improvement on the older Newcomen engine made it much more efficient and therefore more cost-effective to run and helped spark the Industrial Revolution.

Born in Greenock on January 19th 1736, James was destined to inherit his father’s shipbuilding business. However, after financial misfortune struck his inheritance was lost, and he needed to learn a trade. In Glasgow and London he learned mathematical instrument-making and in the mid-1750s he was employed by the University of Glasgow, where he set up his own workshop. While working at the university in 1763, Watt was asked to repair a model Newcomen steam engine. Since its invention in 1712, these engines had been used in mines to pump out water. Watt realised that the Newcomen engine wasted around three quarters of its heat by continuously heating and cooling the engine cylinder. In 1765 Watt came up with a solution: a separate chamber in which the steam can condense, making it much more efficient. His design used less coal, making it more economical.

Although Watt is most famous for his work on the steam engine, he also did considerable work in other fields. After closing his workshop in 1766, Watt opened a land-surveying and civil engineering office in Glasgow. While working on his steam engine he kept busy with numerous engineering jobs, such as surveying the Monkland Canal, designing a bridge over the River Clyde, and improving the harbours of Port-Glasgow and Greenock. He invented the first commercially successful machine for copying letters and drawings. In addition, his knowledge of chemistry enabled him to develop one of the first solutions for bleaching textiles with chlorine, though rival scientists eventually beat him to it in developing the process. Watt has also been credited with adding to the understanding of energy, gases and electricity.

Thanks to his invention of the separate condenser, James Watt has been called the father of the Industrial Revolution. The invention of the much more efficient design as well as the rotative engine and the following evolution of the steam engine opened up new avenues of trade and resulted in mass migrations of rural populations into the newly industrialized cities. In addition to changing the nature of mining and manufacturing, Watt inspired future innovators in transforming the way people travelled, with improvements in steam locomotives and steamships. By the end of the 19th century James Watt had helped Britain become the “workshop of the world”.

Temporary exhibition “Watt a Bright Idea” now on at the Museum of Scottish Railways, until the end of October 2019.

Find out more about the commemoration of Watt's life and work on #GoIndustrial Day, 25th August 2019.

Back to the Mill