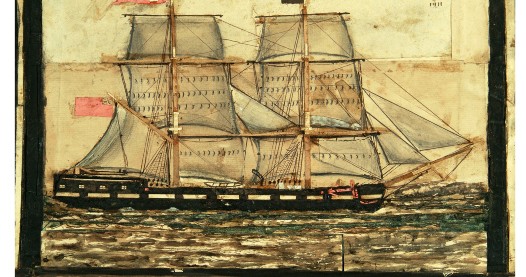 Betsy Miller achieved the unparalleled distinction of being the first woman ever to be registered as a ship’s captain, and named as such in the House of Commons and House of Lords.

Betsy was the eldest daughter born to Captain William Miller and his wife, Mary, who lived in Saltcoats, a small coastal town on the beautiful west coast of Scotland. Captain Miller ran a shipping company carrying cargo across the waters to Ireland. As a young child, Betsy would accompany her father on his journeys. Betsy was totally captivated by the sea and dreamed of being master of her own ship one day, following in the footsteps of her father. However, in those early days it was unthinkable that a woman would work on board a sailing vessel let alone be ‘Master of the Ship’. Yet, how young Betsy would dream …

When Betsy reached adulthood she worked for her father in his company, whilst her brother Hugh was groomed to take over the company and run the ship. Tragedy hit the Miller household when Hugh was drowned in an accident at nearby Ardrossan harbour, and Captain Miller, her father, suffered an illness which left him an invalid. The Miller family had incurred colossal debts and Betsy, by then 46, stepped into the realms of history and set about reinstating her family name and making her fortune.

Betsy gained a reputation as a fine ‘seawoman’ who was capable of handling the Brig Clytus in the stormiest conditions. Very much a lady, and a genteel one at that, Betsy was a stickler for being properly dressed for all occasions and took great pride in her appearance, her delicate lace caps always pristine, her dress impeccable. Her youngest sister, Hannah, accompanied Betsy acting as her chaperon.

Betsy’s fourteen man crew had great respect for the ‘skipper’, for Betsy would sail when other experienced Captains would not. Betsy was a woman of guile and humour and her crew loved her for it. She was a shrewd business woman and traded in coal and limestone between her home port of Saltcoats and the major ports in Ireland.

Captain Betsy Miller retired when she was seventy to the family home in Saltcoats and died two years later leaving her youngest sister Hannah, to continue where she left off.

Text reproduced in good faith and with thanks to the author. ALL RIGHTS RESERVED, ED WALKER & LINDA HARNETT ©2008

Images from The Ardross-man and North Ayrshire Heritage Trails.