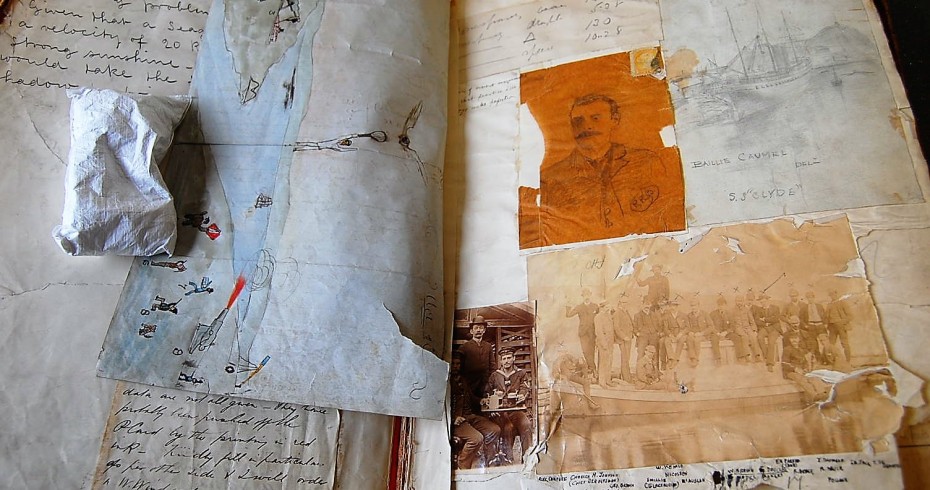 “The Arkivz” is a large scrapbook maintained by Drawing Office staff at the Denny shipyard in Dumbarton, from the Scottish Maritime Museum’s recognised collection of shipbuilding artefacts. It is a treasure-trove painting a picture of the men and women who worked there from 1889 to roughly 1950, encompassing both World Wars.

It also shows a thriving workplace social calendar, with clippings from annual picnics, dinners, dances, amateur dramatics, and inter-departmental sports contests (often with heated correspondence!) Event programmes often list toasts and songs, starting with “The Queen” or “The King”, and concluding with Auld Lang Syne. They demonstrate a tradition of formality long gone. Entries include hand-drawn sketches, caricatures, cartoons, poetry, and letters, often showing whatever was the “hot topic” of the day in the Drawing Office. Many of the cartoons and caricatures are of-their-time and would now be regarded as inappropriate!

Measuring the “BMI Index” for example, is not actually a new concept. From 1892 is a hand-written table listing the staff and showing each person’s weight, height, and a ratio calculated in “lbs. per inch of height” - The unfortunate high scorer (J. Ledgett) is highlighted in bold pen.  Other calculations in The Arkivz include light-hearted “scientific” research such as :“Given that a seagull is travelling at a velocity of 20 knots in strong sunshine - find out how long it would take the friction of the bird’s shadow to bring it to rest”.  The treatise is developed over several pages, accompanied by drawings to show the supposed results!

Through 1914 and up to 1918 many thank-you letters, notes, postcards appear from Drawing Office staff now enlisted in military training, then at the fronts in France (in the British Expeditionary Force) and beyond.  The mood in the earlier correspondence is upbeat and positive - as the war progresses this become much more resigned, then sombre, as reports of casualties increase.  These commence with letters to “Mr Jack” and later (from 1915) mostly to be addressed to “Mr Russell”. These two were the Fathers of Denny’s Drawing Office; much more than just managers. They provided a stable, fixed point of contact and, from the tone of the letters sent to them, they were regarded as supportive, paternal mentors to their devoted staff.

The staff remaining at the Drawing Office raised collections and sent gifts to “the troops”. These were most often cigarettes and tobacco, sometimes cakes and sweets.  Very many thank-you letters, notes, and postcards were added to The Arkivz.  The mood in the earlier correspondence is upbeat and positive; as the war progresses this become much more resigned, then sombre, as reports of casualties increase.

One of the most interesting wartime stories concerns Charles Clinton, aged 24. The scrapbook has a black-edged death announcement from his parents dated 16th August 1915, detailing his death at sea during the sinking of the HMS India. On the following page however is a typed letter from the supposedly deceased Charles, dated the following September and sent from Norway. In this he explains how he survived the attack that sank his ship and caused his misreported death.  Further correspondence details his slow progress back from Norway to Scotland. Four months later a postcard from Jorstadmoen, Norway, dated January 1916 gives thanks for “the box of cigarettes ... news of a big fire in Bergen. The Post Office has been destroyed and I’m afraid our mails also.”- perhaps this why there is such a long gap between correspondence. 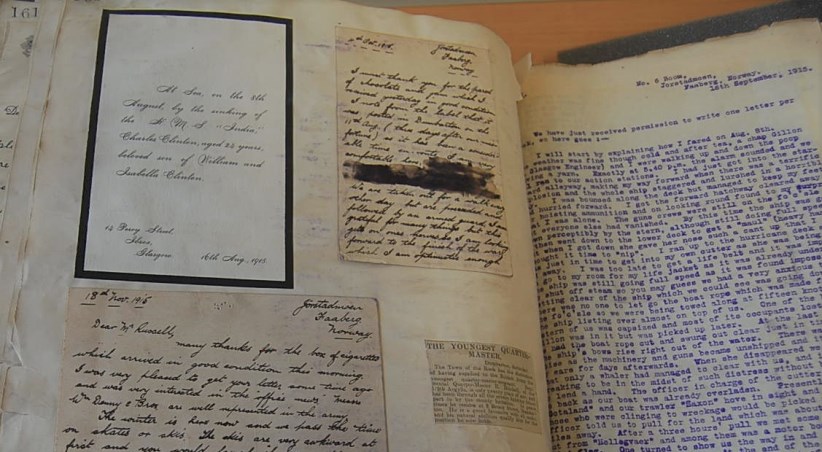 After the cease-fire in 1918, Charles returned to work at the Drawing Office and appears in the Yard’s football team for 8th April 1919 and  on 22nd April, 1919. The programmes for the Drawing Office Staff Dinner in December 1919 and 1920 are signed by the assembly, including Charles. However, Charles Clinton’s name is missing from the programme for the 1921 Dinner, and does not appear again.

The entries after the war gradually lighten in tone once more. By 1919 humorous entries again feature, one memo in particular spoofing military censorship with redactions, red pen, ‘SECRET AND CONFIDENTIAL” stamps. The entries become less frequent after 1923, with the pages leaping forward to 1946, then one entry every year or so, before finally petering out in the 1950s.

The Arkivz give us an unusually detailed window into the lives of the staff of Scottish shipyard for a period of almost years, and is a prized object in the Scottish Maritime Museum collections.

David Michelson is a Collections Volunteer at the Scottish Maritime Museum

Nature is on Irvine’s doorstep