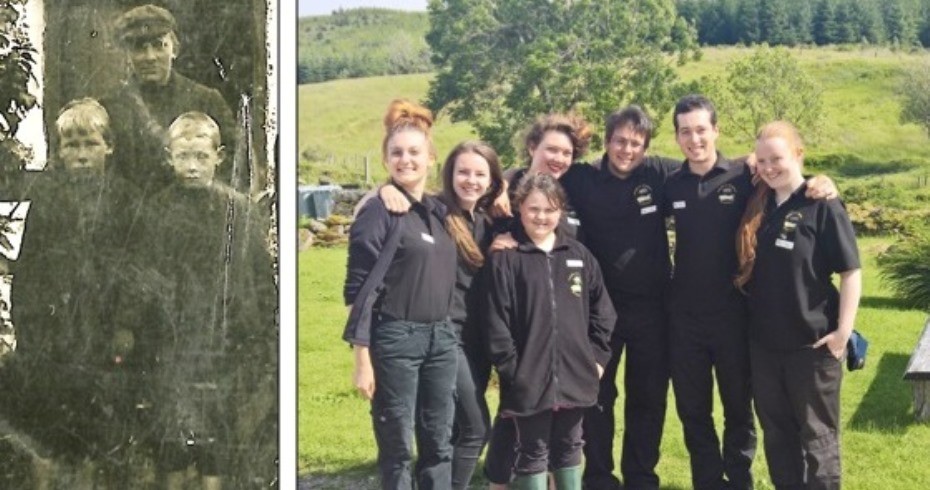 Auchindrain was once a place where the people of a rural community lived and worked together; we see the evidence of their existence ingrained in the land and buildings. The museum celebrates and explains these people and their culture, preserving many of their possessions, homes and memories. Today the township has no permanent residents, but it does have a new community instead: the staff and volunteers, long-term and temporary, who work to keep Auchindrain alive and running. Many parallels can be drawn between these two groups, even if the end results are different.

In the past, the township had three types of occupant, who differed in their levels of permanency and influence. First were the individuals and families who were long-term residents. They feature in the written records over the centuries, witnessing countless changes and developments. Second were the children born and raised in the township. They began working in their teens and generally left for employment elsewhere, but their identities and relationships connected them to Auchindrain eternally. Last were the lodgers: individuals (often young adults) who came for a while to learn practical skills. They rarely stayed, or returned after they had moved on, but their experiences here gave them abilities and confidence. All three are mirrored amongst those who make up the new Auchindrain community today.

Past long-term residents included generations of Munros, Sinclairs and later McCallums, who lived here for centuries. These families influenced and observed the changes that took place, and were significant amongst the people of the township. Their bygone presence is echoed now by the small team of permanent staff who work at the museum to manage and oversee its operation. Between them, these people play a multifaceted role, both as organisers and administrators, and as leaders and role models for others.

Hundreds of children were born and raised at Auchindrain, although most moved away to settle elsewhere. Their presence is noted in census data, marked by graffiti, and seen in the few photographs we have of the township’s families. The last babies born here were in the 1960s, but today some young adults stay for a considerable time as volunteers or interns: to learn, develop as individuals, and become part of a team where colleagues respect and appreciate one another regardless of upbringing or individual challenges. Some of these ‘Children of Auchindrain’ remain longer than others and develop into more permanent roles, in a way comparable to the children born here who stayed to take over shares in the tenancy from older relatives. Although others stay more briefly, they are equally are welcomed by the museum’s community and maintain their ties with people and the place for years after moving on into the wider world.

There is, lastly, also a parallel to be drawn between the “lodgers” of the township’s past, and today’s participants in short-term projects at Auchindrain. Every year, the museum’s projects and work-camps provide interesting and important opportunities to individuals who have not had them before. These range in their focus. This year, a two-week archaeology dig involved participants of varying ability, age and education level, and from different nations. They came to gain skills and experience, and completed some significant and revealing work. They may or may not stay in contact with Auchindrain and its staff, but all have taken away memories and new-found skills.

The staff, volunteers, interns and project participants involved with the museum at Auchindrain provide the place with its community today. They bring different skills and stories just like the past people of the township, and help to create an environment that radiates hope in a society where so many people feel left behind or mistreated. The workplace is one of diversity and equality; irrespective of ability, upbringing, or education level, everyone is thrown in together … and makes the place alive again.

Images:
Top: the Children of Auchindrain: c.1910 Eddie Neil and Jock McCallum, all born and raised in Auchindrain; and 2017's university interns, local volunteers and young staff.
Above: Dig It! Archaeology Project, with young volunteers from France and the UK.