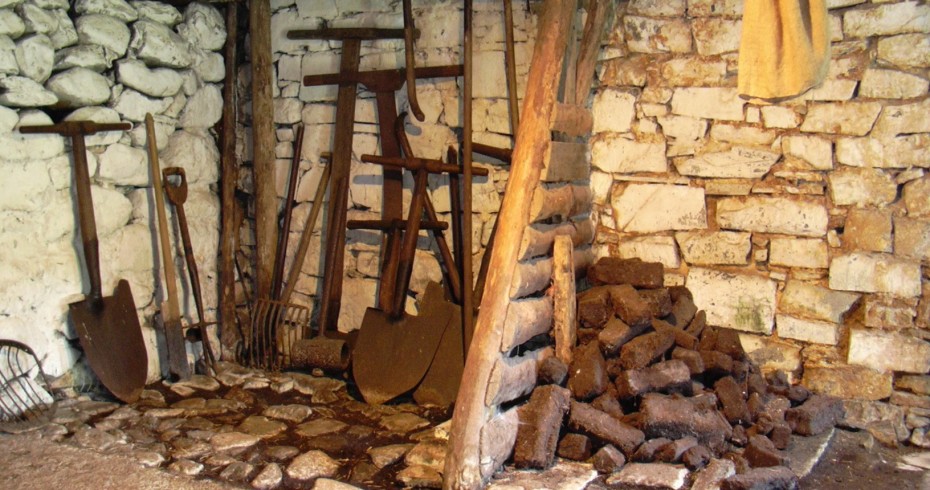 George Bustin is in his final year at Exeter College, Oxford, studying Literae Humaniores (Classics). He spent the summer of 2016 at Auchindrain, through the Oxford University Internship Programme.

From the car-window the township appears out of the trees, lying below the road, resting in the landscape. Many pass by without knowing the history it contains. But the stories are there: pockets in the landscape, waiting to be revealed to those who stop.  Stoner’s House is reached by a quarter-mile walk along the old road that runs through the township from the museum’s entrance, a road that once saw cattle being led in their droves towards the bustle of Inveraray but which is now used only by visitors and the museum’s tractor.  The tarmac of the A83 is printed on the hillside nearby, but this old road crunches underfoot as it dips and bends and creases along the floor of the glen.

The house forms a triangle with two other buildings – Martin’s House and The Slate House, now home to the museum’s hens. It is a typical 19th century longhouse: at one end are three rooms for living, sleeping and cooking; at the other is the byre, which housed animals in the winter months and doubled as the lavatory for the house’s human occupants.

Around 1905, young Jock McCallum was playing down by the burn which runs through the township.  He found what he thought was a wild parsnip, and pulled it up to chew on the sweet root.  But what he had actually picked was a Water Dropwort, a plant with a root so toxic that just one can kill a cow. Jock became ill and was near death when his mother saw “an old tinker woman passing by on the road” – one of the Scottish Gypsy-Travellers.  She was well-versed in the study of herbs, knowing which could heal and which cause harm, and got to work on Jock. He survived, although he lost all his hair and was sickly for the rest of his life. From then on the McCallums felt that they owed the tinkers “an eternal debt of gratitude” for saving Jock’s life.  When Stoner’s House became unoccupied in 1937, the kitchen was kept habitable with a working fireplace and two beds, ready for use by any passing Travellers who wished to stay overnight.

Old Stoner Munro died in January 1937, with his share in the tenancy passing to his eldest son Malcolm, known as “Cally Stoner”.  But times were hard in farming: prices were low and costs high. In March 1937, Cally Stoner and Eddie MacCallum (the elder brother of Jock McCallum in the first story) sat talking in Cally’s kitchen.  Reluctantly, they agreed that “there is not a living to be had here for more than one family”, and tossed a coin to decide who would stay and who would leave. The last two families in a township that had once been home to seventy people, with the issue reduced to the random fall of a coin. We do not know who called or who tossed, whether they said heads or tails. But we do know it was Cally who lost, and he was soon away with his wife Bella and their daughters Morag and Flora for a new life on a croft in the islands.  Eddie remained at Auchindrain until retirement in 1963, farming alone: the last man standing in the last Scottish township.

The Auchindrain houses were named for the head of the household.  When a house became unoccupied the last name remained in use because there was no new one to replace it.  Stoner’s House is named for the stonemason Duncan Munro (1858-1937), whose Gaelic nickname was “Donnchadh Clachair”.  Clachair is the Gaelic for stonemason, but translates literally as “stoner”.  In Duncan’s day the house would have been “Taigh Donnchadh Clachair”, but this became Stoner’s House when Gaelic ceased to be the township’s first language in the 1930s.