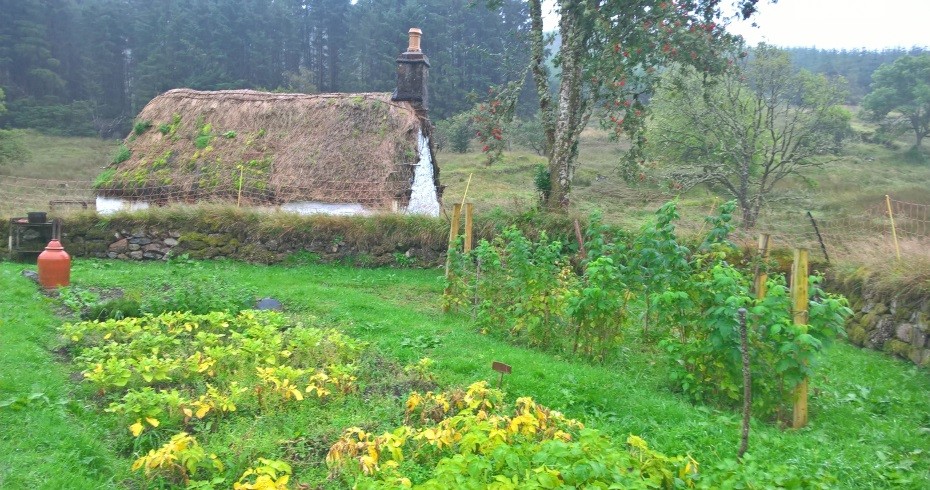 We know very little about the day to day lives of working class women in 19th century rural Scotland. The limited information we have indicates that there was no equality between the sexes other than that both had to work very hard to survive. Beyond this, everything suggests that two centuries ago women rarely had much of an independent existence.

At Auchindrain, however, we still remember Isabella McCallum, known in Gaelic as Bell a'Phuill ("Bell who lives by the muddy place"), the “wise woman” of the community during the late 19th century and until her death aged 93 in 1915.

Township tradition, handed down by the last generation of residents, is that Bella knew the healing qualities of the plants that grew in her kailyard and in the surrounding countryside.  It was good for a township to have someone with skill in the special and often mysterious art of medicine: doctors and hospitals were often far away and only available to those with money.   In a society like the one in which Bell used to live, her abilities to treat illnesses and injuries made her worth her the title of “wise woman”, although it also sometimes meant she was thought to be a witch because people did not understand how she could heal – she must have been using magic!  Either way, her status meant that she was the only single woman in Auchindrain to live in a house on her own, at a time when almost all women were restricted to the roles of wives, mothers or servants.

Nevertheless, we can't expect Bella to have had a life like women today.  She was honoured and supported by the township, and in the last years of her life received a small pension of tea and coal from the Argyll Estate.  But she had also been the subject of a great scandal. Historical sources tell us that, in 1842, aged twenty, Bell gave birth to a son, John McGugan.  However, the child’s father, Alexander, who was the elder brother of the respected long-term township resident Neil McGugan, did not marry her.  It was not unusual within the rural working class for a woman to become pregnant before marriage, because in a society where children were important workers in farming and to look after their parents in old age, this proved that the relationship would be fertile.  If it was not, social convention allowed a betrothed couple to separate and try again with other partners.  So the scandal was not so much that Bella became pregnant, but that Alexander did not then marry her.  What is interesting is that the people of the township did not reject Bella but instead helped and accepted her. This suggests that Alexander was the one who walked away, abandoning Bella and the baby.  The child seems to have been brought up by his uncle Neil McGugan whilst Bell lived close by with her mother until she died.  By the time of the 1861 census, however, Bella was living alone in the house she occupied for the rest of her life, and was officially registered as a Head of Household.  For a woman who was not a widow, this was very unusual.

What is fascinating about this story of an ordinary, Scottish country woman is that in our small and apparently underdeveloped community, we have an example of how women could be independent and self-sufficient through reliance on skills which earned them respect, trust and maybe even a little deference within the community.  Could Bell be comparable to girls and women who live nowadays? Probably yes, especially because of being just a normal woman who knew how to take advantage of her own abilities.