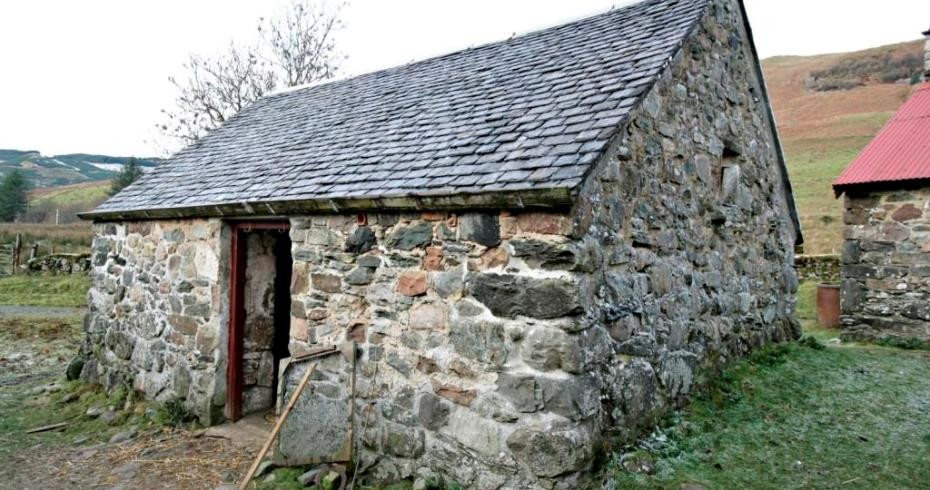 It’s a building you could easily overlook. Set in the midst of larger and more interesting buildings, it’s little more than the size of a large shed. We have it accessioned as ACHDN.E.

It’s a building you could easily overlook.  Set in the midst of larger and more interesting buildings, it’s little more than the size of a large shed.  We have it accessioned as ACHDN.E.  The last generation of residents called it “The Slate House” because it’s the only building in the township with a slate roof.  That roof dates from when the little building was reconstructed in 1897 by Donnchadh Clachair, Duncan Munro the stonemason, helped by his 14-year-old neighbour Edward Munro.  We know this because they both left their names cut into the building’s stones: a neat and sober “D Munro 1897” with a lemniscate mark, and a straggly teenage scrawl “ E Munro, Thornfield Manor[1] 1897”. Its internal layout is that of a stable for two horses, but thereby hangs a tale and another one within that. For those that know about these things, you can look at the stables in an old farm and work out roughly how much land was being worked.  From the other direction, the size of the farm suggests how many horses would have been needed.  And that’s where the problem started.  Back in 2011, our expert Gavin (a man who really does know about these things) couldn’t puzzle out The Slate House at all.  “You’ve got too many stables for the size of the place”, he said, before also noting that the standings in The Slate House were for horses much larger than those used on the land at Auchindrain. “I wonder if they were running a carting business on the side”, he pondered. So we dug around in the archives and, yes, they were.

Back in the early 19th century, Scotland’s industries were hungry for resources, particularly metal ores such as iron, copper and lead.  In the 1820s, the prospectors found copper in the generally-barren rocks of Mid Argyll, and two small mines were opened: Craignure, a couple of miles south-west of Auchindrain, and Coille Bhragad, six miles to the north.  Peter McCallum from Auchindrain transported the tools and materials needed to set up the mines.  At first the work was tough and the profits low, and the mines were only worked intermittently.  Then, in the 1850s, they realised that the chemically-complex, hard, metamorphosed sandstone from which they were struggling to wrest small quantities of copper was actually a rich source of something much more valuable – nickel[2].  Activity expanded massively, and for a few years in the mid-1860s these two mines were the largest producers of nickel in the UK.

The people of Auchindrain were quick to get in on the act.  Neil McGugan, one of the township’s resident industrial workers, went to work at the mines and in due course became foreman, remaining employed well into the 1870s as they worked over the dumps from the earlier copper mining to extract all the nickel.  Alongside this, young Edward McCallum, who was primarily a farmer, was quick to exploit the connections of his older relative Peter, and took the contract to carry the extracted nickel ore from the mines to eagerly-awaiting ships on nearby Loch Fyne.  For this he would have needed a couple of big, strong, draught horses – far larger animals than they kept to work the land where full-size heavy horses would have struggled with the sticky, wet ground.  Those horses required a stable, and so came to be what we now know as The Slate House.

We do not know how the building was used after the mines closed and the big horses were, presumably, sold.  By the 1950s it was where they kept the township’s bull.  Today, it is home to the museum’s small flock of hens.  But when you visit, look again at this little building and remember its place in Scotland’s industrial past.

[2] Nickel – Ni – was discovered as an element in 1751.  First used to make green glass, from the mid-19th century it was increasingly in demand to mix with iron and copper to make hard, corrosion-resistant alloys.