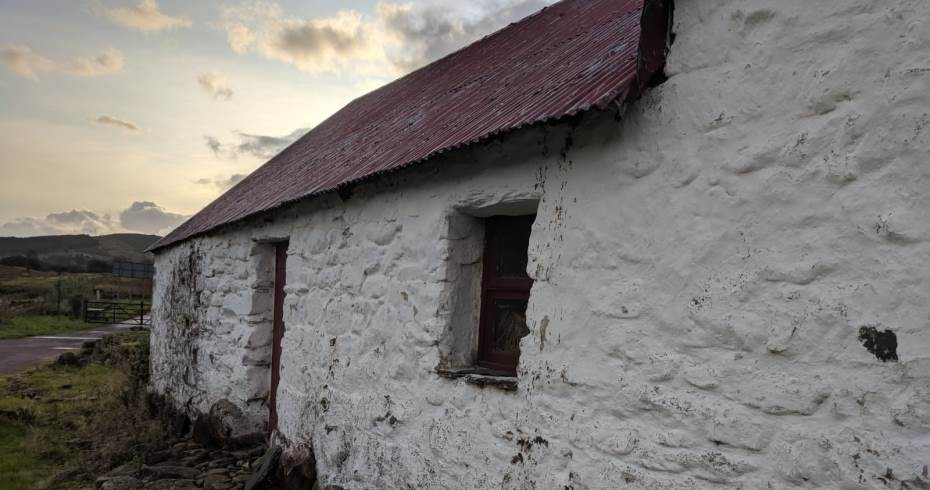 Living and working on site over the summer as one of five interns, I have seen Auchindrain Township at all times of day. In the evenings, once the chattering of visitors and the hissing of the coffee machine have subsided, the site is blanketed in what feels like an almost impossible quiet. Until a lorry thunders past.

One of the first things that struck me about the site was its location: it’s cleaved in two by a trunk road. As you drive down the A83 towards Furnace, you get a brief impression of red and white before the buildings of Auchindrain become a passing roadside curiosity, one of many on the journey south. I wondered whether this had always been the case for those travelling in Argyll, or whether the road was more recent. To my eyes, it represented speed, ease and connectedness - the tenets of a modernity far removed from life in a farming township. As a newcomer to the area, I had a lot to learn. It’s easy to take for granted the accessibility the current UK road network provides to all but the remotest of peninsulas; in contrast, for much of history the Irish Sea and The Minch united people, industries and ideas, presenting less of an obstacle to movement than the mountainous landscape. It was a dynamic, cosmopolitan nexus of trade and communications, facilitating the hegemony of first the Norse and later the Lords of the Isles.

Although it may be tempting to think of Auchindrain and similar communities in the past as isolated, backward-looking and homogenous, this was far from the truth. The township sits at a crossroads of trade routes, ancient and modern, which did not have to pass directly through it for its people to make use of them.

In the 19th century, a Campbell from Auchindrain owned and captained a Loch Fyne skiff, a small craft crewed by two or three people, used locally to fish for herring and shellfish. On a larger scale, the industries that rose and fell at the mouth of the Leacann Water during the 18th and 19th centuries owed their existence to the cosmopolitanism of the Irish Sea. For a long time the forests of Argyll were the source for the charcoal indispensable to some industries.  Charcoal does not travel well, so it was easier to bring the furnace or the gunpowder works to the charcoal than the other way around.  In 1755, the owners of Duddon Ironworks in what is now Cumbria built a blast furnace at the mouth of the Leacann, giving the village of Furnace its current name. The furnace ceased working in 1812, but in 1841 Lochfyne Powder Works was built nearby, operating until it blew up in 1883.

Alongside this, for much of the 19th century the area had two productive and profitable mines at Craignure and Coille Bhragad, producing copper and nickel.  The same seaways that took away the ore for smelting brought in Cornishmen to lend their expertise in the mines. If the experience of Auchindrain’s own Bell a’Phuill provides any indication, it’s possible some Cornish blood found a foothold locally too. She and Alexander McGugan, the father of her illegitimate child, probably met whilst working at one of the mines, and they can’t have been the only ones to have had a workplace romance. Certainly, in the 19th century, surnames from the northwest of England begin appearing in the area.  And by the 1860s, Clyde puffers – small coastal steamships – were working around the islands and sea-lochs, delivering coal, machinery and other manufactured goods from Glasgow factories to Mid Argyll.

A network of drovers’ roads, older than the township itself, criss-crosses Argyll. Auchindrain lies at the start of the Ford-Inveraray road, historically one of the most important routes for reaching Scotland’s largest “trysts” - cattle markets - in Crieff, Falkirk and Glasgow. Sections and suggestions of these roads survive throughout the local area – the path up to Loch Leacann is one. The walk is steep and at times convoluted; it is hard to imagine cattle being herded down the hillsides on its tricky terrain, and it is a testament to the skill, endurance and character of the drovers that this posed no extraordinary challenge to them. Auchindrain was a stopping-place along the way, with drovers and cattle provided with food and water to help them on their journey. Local roads like these were often of poor quality and only wide enough for a single cart.

In 21st century Mid Argyll, the nexus of trade and communications is the black ribbon of the A83, and the lorries thundering past in the silence of the early morning.  But in historical terms this is really quite recent, and within living memory the road system was by no means the main means of transport into and out of the area around Auchindrain.