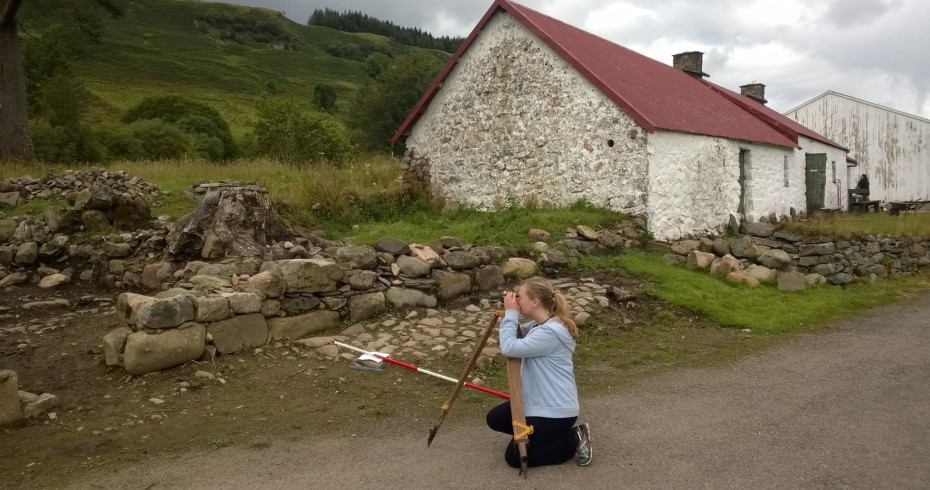 In the Summer of 2015, Silja Lehtinen worked at Auchindrain as part of the Oxford University Internship Programme, having just completed her first degree in Archaeology & Anthropology. She spent most of her summer at Auchindrain excavating the ruins of ACHDN.W, a one-room house with an attached weaving shed.

The day has been a busy one in Auchindrain with plenty of work for everyone. Inside one of the houses an old woman sighs in frustration, leaning against her kitchen table. In her hurry to get the pancakes ready she has knocked over a jam jar. The top is chipped and it is useless now. She picks it up, shrugs, and tosses it onto the midden beside her house. There was a building there once, a weaving shed, she remembers. The walls have long since fallen, the stones reused in other buildings. Turning back inside she stops for a moment, letting her thoughts wander. How long will her house stand here, weathered by gusts of wind and sheets of rain, year after year? Fifty years? A hundred? No, she shakes her head. What difference does it make? Wiping her hands on her apron she continues preparing the pancakes for the hungry folk coming in from the fields.

We cannot really know what the people of Auchindrain were like further back than the stories passed down from the last generation of inhabitants. It is the same all around the world, where as the generations pass the memory of individuals slowly blurs. This is especially true among ordinary workers who have left nothing in writing. Even photographs can only take us back a handful of decades. The legacy of these people only survives in the objects they have left behind; these remnants are their footprints, the clues with which, today, we can attempt to build a picture of their daily lives.

While we cannot really know whether an old woman making pancakes broke a jam jar and discarded it onto a midden beside her house, by combining archaeology and historical research we can take some good guesses. Maps and census data tell us about the people and buildings present in Auchindrain at particular moments in time. But if a map from the 1700s shows a building in what is an empty area today, the chances are that with careful excavation we can find the base stones of the walls and the remnants of household or farm objects.

Broken pieces of pottery, corroded metal and the fragments of leather shoes might not seem like much, but we hold the past in our hands. Analysed in context, we can guess what a building would have been used for, and become familiar with everyday items used by the people who lived there. Sometimes we find something more unusual, such as the engraved silver mount from a gentleman’s walking cane, a coin or a part of a piece of expensive commemorative porcelain, and wonder how it came to be there.

So while we might not know the detail of the old woman and her pancakes, archaeology helps us to confirm roughly when the building went out of use and became a ruin.  We can work out that it was a one-room cottage with a fireplace and a built-on weaving shed, which later then probably became a byre for cattle.  At one end, an accumulation of broken pottery, glass and other items shows that it later became a midden – a rubbish dump. From this, from other people’s rubbish, we can learn quite a lot.  We know they ate a lot of jam, drank coffee made from bottled essence, and treated their illnesses with potions and pills from the chemist.  We know what type of everyday crockery they had on the table, and that they had a china tea service for best.  We know this because we have held pieces of these in our hands, just as they were once held by the people of the township all those years ago.

With archaeology we can dig into Auchindrain’s past and touch the lives of those who can only speak to us through the objects they left behind.