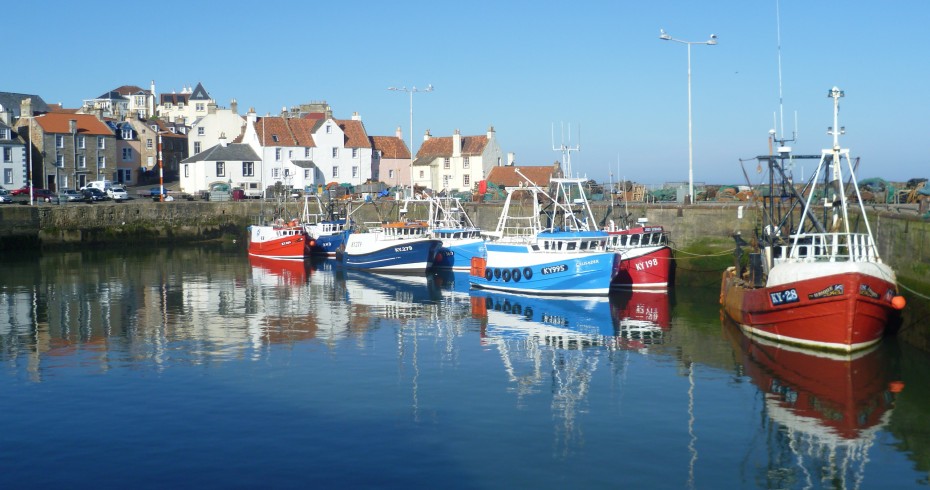 The small fishing village of Pittenweem was devastated by the loss of men and boys who went to war in all branches of the services during the First World War.

The Great War of 1914-1918 resulted in a catastrophic loss of life, a generation of young men was almost completely destroyed, and there was not a part of Great Britain which was left untouched. The people at home supported them however they could, with raffles and sales being very popular. One initiative was an embroidered bed cover, which the Museum is lucky enough to have in its collection. People paid a shilling (5p) to have their name embroidered on this cover and to enter the raffle. James B. McKay, the secretary of the Citizen’s Committee, had received correspondence from Flanders in June 1916 saying, “fags [cigarettes] are very scarce”. We can assume this was the trigger to the local community to find ways to raise funds to send cigarettes and other comforts out to Flanders via the Red Cross.

As hard as things were for the serving men, back home there were difficulties as well. The majority of the larger boats and younger crews of the East Neuk fishing fleet had been requisitioned by the admiralty to mine sweep in British waters or abroad, and to try and prevent submarine activity. The fishing limit in the Firth of Forth had been reduced to half a mile from shore, severely restricting the ability to make a living.  Many East Neuk fishermen risked breaking the rules and going outside the limits in a desperate effort to feed their families. If they were caught the penalties were severe; one man was fined £20 or twenty days imprisonment.

The East of Fife Record on the 14th of September 1916 has a report of two fishermen who had been very severely fined for “fishing contraventions”. James Bowman of Pittenweem pled guilty and admitted to two previous convictions. His solicitor put the case for the dreadful hardships these men were facing; Bowman had a family of eight who were literally starving. The plight of fishermen was so bad that a soup kitchen had opened in Pittenweem. The Sheriff was sympathetic to the fishermen who were being deprived of their livelihood, while acknowledging that the precautions taken for the safety of the realm were essential. The fine was reduced from £10 to £1.

We have to remember that these communities were very close; fisher folk and farmers would not have had a household unaffected. From the names on the cover we see a cross section of people who had either already lost loved ones or who would feel the effects of this war later. From Balcaskie Estate Lady Mildred Anstruther paid her shilling, never realising her son Sir Robert William Anstruther would die in 1921 after being twice wounded during the war. He was awarded the Military Cross and the Croix de Guerre. Helen, wife of William Fleming the local blacksmith, lost her son John in 1917, and William, who was a volunteer, in 1918.