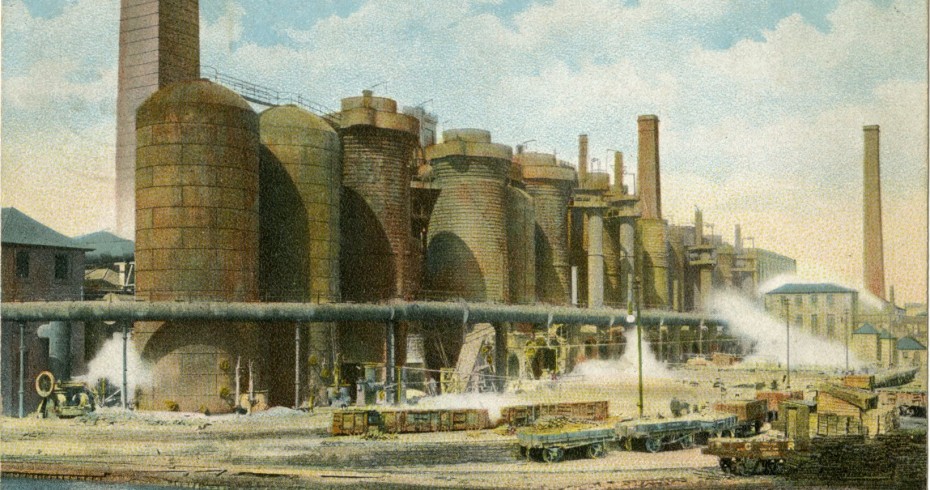 The remains of Summerlee Ironworks are of national importance – they are the only ones of their kind surviving in Scotland and the site is a Scheduled Ancient Monument.

The works opened in 1836 and in 30 years it was one of the largest ironworks in Scotland with eight furnaces in blast. For almost a century it produced thousands of tons of high quality pig iron, employing hundreds of workers. The iron produced was in demand all over the world. Some was shipped as pig iron for working up to iron products. In the West of Scotland it was used to build steam locomotives, ships, iron buildings and all kind of machinery. An innovative company they built a chemical recovery plant on site to process the waste gasses from the blast furnaces; ammonia was sold to farmers as fertilisers and tar to distillers. In some years Summerlee made more money from these chemicals than iron.

The Summerlee furnaces dominated the Coatbridge sky line, so much so it was known as the ‘Iron Burgh’.  A government inspector visiting the town in 1840 describes it well:

‘At night, ascending to the hill on which the established church stands, the groups of blast furnaces on all sides might be imagined to be blazing volcanoes, at most of which smelting continued on Sundays and weekdays, by day and by night without intermission.’

In 1932, with falling demand for pig iron and local exhausted, the works closed. The site was demolished six years later and the great 19th century ironworks lay buried beneath tons of industrial rubble and debris for over 50 years.

In the 1980s the site was excavated by volunteers. The excavations revealed the main structures; the blast furnaces, heating stoves, engine houses and boilers. A large number of objects were uncovered, including pig iron bars, tools and workwear. You can explore the remains today at Summerlee Museum.