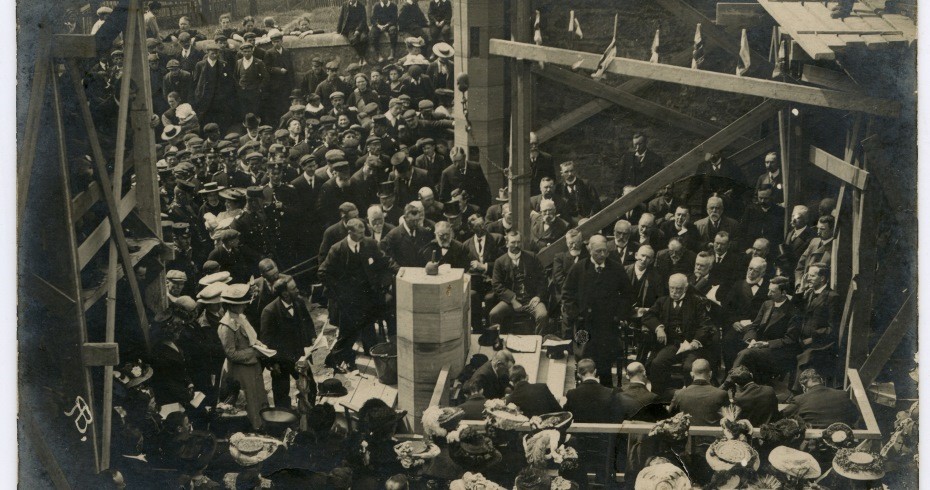 While hats may not be directly related to the shale mining industry, you’ll probably have noticed that in almost every picture we post that involves people, those people are usually wearing hats. When we look back at images from the 19th and 20th centuries, we can use hats as a kind of shorthand to make general judgements about a person’s social standing.  This is exemplified particularly well in the postcard pictured above. This postcard recently came into our possession, and it gives us an excellent snapshot (literally) into life and social class in 1905.  It depicts the laying of the memorial stone at St. David’s Church, Bathgate, in 1905 by Lord Rosebery, a former Prime Minister. Here we can see the full spectrum of social class in West Lothian at this time.

We’ll start with the women at the rear of the crowd, peering over the high wall.  It’s fairly easy to work out that these women are not wealthy. Rolled up sleeves, flyaway hair and – easiest to notice at first glance especially compared with the crowd in general – no hats.  Compare them to the seated ladies in the foreground in their extravagantly-flowered-and-feathered hats and the differences in social standing become obvious.

Next we’ll move on to the group of men standing towards the rear of the image, behind the line of police officers. Now, if that wasn’t enough of a clue to tip you off regarding their position on the post-Victorian social scale, their hats are a definite giveaway. They are wearing flat caps (or bunnets if you’re Scottish). The flat cap has been linked to the working classes in Britain for an extraordinarily long time – since the 16th century, in fact. In 1571, Parliament decreed that all non-noble men and boys over the age of six must cover their heads with a woolen cap on Sundays and public holidays. This was done to boost domestic wool sales. Anyone caught without a cap was fined.  The law was repealed in 1597 but by then the flat cap had become forever associated with “non-nobles” i.e. the working classes.  Hence the “flat cap = working class man” trope that is repeated again and again throughout history and visible in hundreds of images across our collections.

Now we’ll circle back to the wealthy ladies in the foreground of the image.  As previously mentioned, they obviously occupy a higher social standing than the women behind the wall (also coded into the language I just subconsciously used to describe them – did you notice “wealthy ladies/working class women”?). The abundance of flowers and feathers adorning the hats of these ladies speaks volumes about wealth before we examine further and notice the beautiful lace collars and the fact that they are seated while the working-class people behind their barrier of policemen are standing. These are likely invited guests (they’re holding what looks like programmes) and there’s a strong possibility that at least some of them are the wives of the wealthy men seated right in the centre of the image.

Here we are then, at the centre of this image, where the power lies. The wealthy men, suited and seated and (although you do admittedly have to look for them) holding top hats in their laps or placed on the stage in front of them.  These are the Great and the Good of West Lothian society back in 1905 (Lord Rosebery is standing to the right of the stage if you were looking for him). I am of the opinion that at least two of them are asleep.  Interesting to note is that only three of these men are wearing their hats while the rest are hatless. It’s possible that it was hot or breezy that day and the hats were removed for comfort (likely that the ladies’ hats were pinned in so tight they couldn’t have been knocked off under any circumstances, and the same pins would have prevented them removing their hats in the heat anyway) or that it was considered polite to remove your hat for such an occasion.

Here ends our very (very) broad assessment of this image and our brief foray into social history. We hope you’ve enjoyed it – normal shale-based service will be resumed shortly!