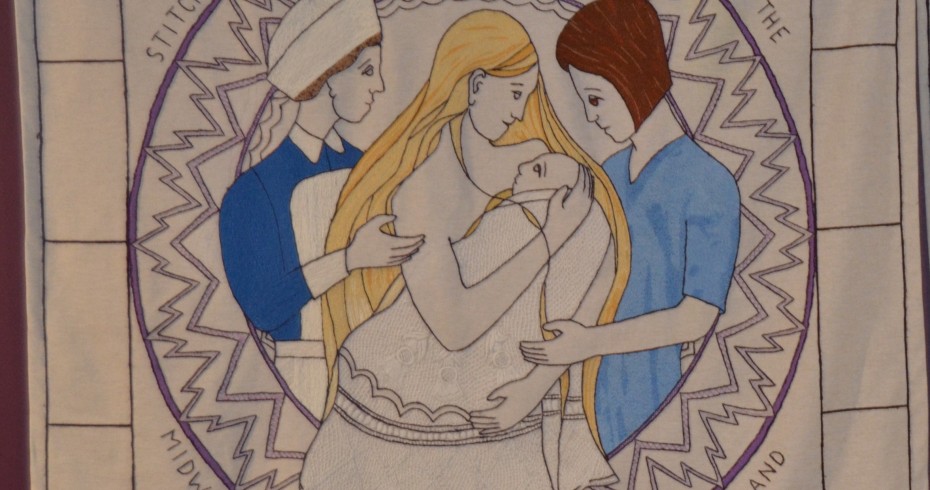 The Midwives Scotland Tapestry panel was launched at New Lanark last week, in advance of its final destination at the new Great Tapestry of Scotland location in/or around 2020.

As a historic hub of learning and leisure, New Lanark World Heritage Site was delighted to unveil this NEW tapestry panel created by the Royal College of Midwives which is on show, for the first time, as part of the Great Tapestry of Scotland, currently being exhibited at New Lanark until the 1st July 2018.

The Royal College of Midwives tapestry panel marks the Centenary of the Midwives Act (Scotland) 1915.  Over the course of 2015 the panel, supported by a group of expert midwife needle-workers  travelled the length and breadth of Scotland to enable midwives, maternity support workers, student midwives, professors, paediatricians,  anaesthetists, obstetricians, porters and domestic staff to put a stitch in a piece of history.  The final stitch was made by Her Royal Highness The Princess Royal, Patron of The Royal College of Midwives on the 2nd December 2016. This is the first time that the panel has been exhibited as part of the Great Tapestry of Scotland.

In the bottom right corner of the panel is the badge of the Central Midwives Board for Scotland (CMB) which was in use between 1962-1983. Inside the blue surround bearing the CMB’s name are three symbols special to midwifery in Scotland. From the top down, they are: the thistle of Scotland; three oystercatchers, known as gille-Bride, meaning the page or servant of Bride. Thus they are connected with St Bride through their Gaelic name. Bride is the Celtic saint associated with fertility; on the badge, below the oystercatchers is the dove associated with care and attention. In the bottom left is a snowdrop, also closely associated with St Bride and symbolising the coming of new life. Bride is widely looked on as the patron saint of Celtic midwives, her day is 1 February when snowdrops are showing the first sign of spring. Legend says that Bride was midwife for Mary at Jesus’ birth and that when Mary his mother went to the temple after his birth, Bride carried the candles which remained burning despite the wind. Thus, snowdrops are also sometimes called ‘Bride’s candles’. History has been made by Scottish Midwives in celebration of this wonderful profession.

New Lanark first hosted the Great Tapestry of Scotland back in 2014, exhibiting it to over 13,000 visitors. Now in 2018, The Great Tapestry of Scotland returns to New Lanark as you’ve never seen it before with this amazing new panel. Discover the story of the tapestry’s creation through original sketches, photography, memorabilia and memories from those closest to the project. For the first time ever, panels from ‘The Great Tapestry of Scotland’ are being exhibited alongside fascinating insights from Dorie Wilkie, Lead Stitcher and her team of 1000+ stitchers who worked on the project across Scotland. The exhibition also includes original sketches and personal works by Andrew Crummy, the man behind the tapestry’s beautiful illustrative designs depicting key moments in Scotland’s history.

The Great Tapestry of Scotland was the brainchild of one of the world’s best-loved writers, Alexander McCall Smith. The 44 Scotland Street author, together with historian Alistair Moffat, and with the artistic talents of Andrew Crummy, (not to mention more than 1000 stitchers from all areas of Scotland) formed a team set to produce the world’s longest tapestries through one of the biggest community arts projects ever to take place in Scotland.

Taking 65,000 hours of stitching and using over 300 miles of wool (enough to lay the entire length of Scotland), illustrating 420 million years of Scottish history in 161 panels, this beautiful tapestry depicts the entire history of Scotland.

Textile production and innovation has been the continuous thread throughout New Lanark’s history, from the village’s early years as the one-time largest cotton manufacturer in Scotland, to now producing over 60 shades of high-quality woollen yarn using historic textile machinery and launching the world’s first Organic Tartan in 2015. Through this exciting partnership with the Tapestry makers, New Lanark offers the perfect backdrop for this wonderful exhibition which will be on show until the beginning of July 2018.

Make a day of it, post your visit to the exhibition, spend the rest of your day exploring New Lanark, learning about its fascinating history and when you have finished all of this, why not head out for a woodland walk in the falls of Clyde Wildlife Reserve where you can admire the views before heading to the Mill Café for a bite to eat and a browse round the Mill Shop.

The Making the Great Tapestry of Scotland is the second exhibition to feature in New Lanark’s redeveloped Exhibition Gallery. To find out more visit: THE MAKING OF THE GREAT TAPESTRY OF SCOTLAND, 18 May – 1 July 2018