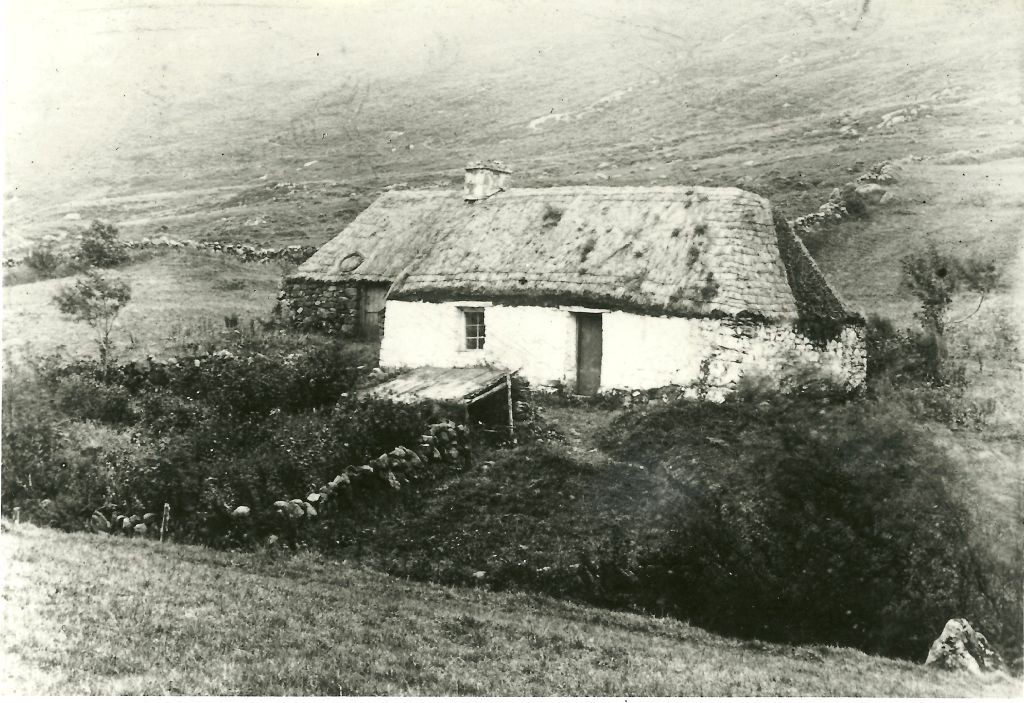 The history of Neil McGugan and Neil’s House tells us so much about the complexities of life in a Highland township.

Neil’s House is named for Niall Mac Eoganán, Neil McGugan (1821-1904), the last head-of-household and who lived there from the late 1850s until around 1902.  He was married to Ealasaid Nic Artair, Elizabeth MacArthur, and they had 12 children.

From the 1850s, Neil was foreman at the nearby nickel and copper mines of Craignure and Coille Bhragad. We believe he oversaw the reworking of the spoil heaps from the early years of the mines when the output was copper ore, to extract the ultimately more valuable nickel ore originally discarded as waste. Others amongst the people of the Township, male and female, also worked at these two mines.  Before going to the mines Neil had been a farm worker. When mining ceased in the 1870s he went to work at the gunpowder factory two miles away in Furnace until that blew up. During the last years of his life he worked as a dry-stone dyker. As a result of his career, Neil is the very epitome of the rurally-based industrial worker in 19th-century Scotland.

There is a wider story. The house sits on a piece of land called Dail na Ceardaich, loosely translatable as "The Workshop Field".  Within the joint tenancy of Auchindrain, it was a "croft" in the ancient sense of the word: an individual tenancy, but a very unusual one in that it was a heritable sub-tenancy. This was created in 1746 by the 3rd Duke of Argyll for Duncan Munro from Auchindrain. Munro had given distinguished service as a sergeant in the Argyll Militia in the 1745 Jacobite Rebellion. Land grants for former soldiers were quite common. In the legal context of Auchindrain as a joint tenancy, the Duke (the land owner) instructed the Auchindrain tenants that Munro (who was not and who never became one of the tenants) was to have the perpetual right to occupy and work a defined small area of land (around 2.5 acres) within the Township.

Duncan Munro only had daughters and, as women, they could not hold land. Upon Munro’s death in the early 19th century, the croft passed to his grandson Duncan McNichol, who was a weaver. In the 1950s, McNichol passed the croft onto his nephew Neil McGugan. On McGugan's death in 1904, none of his children wanted the croft, so the house was abandoned and the land taken back into the Township.

Neither McNichol or McGugan were ever members of the tenancy group. They were industrial workers, not farmers – although they had this bit of land as well.   Munro, McNichol and McGugan and their at-home children were unique amongst the people of the Township whose families were not part of the tenancy group – they had a right to live at Auchindrain. All other non-tenants stayed in the Township only with the consent of the tenancy group. One supposes that a modern equivalent would be to be renting a farm with a cottage at the end of the drive occupied by an old friend of the landowner, and then his grandson and then his great grand-nephew, whom you could not evict.

Neil’s House (pictured above) had one large room.  It was built of lime-mortared random rubble from the surrounding fields, and was limewashed. The thatch roof was mostly made of rush, although the black area on the west, weather-facing, hipped end is probably a repair done in heather or broom. East and slightly behind the house is the workshop, structurally a separate building although the two touched at one corner. This was Duncan McNichol's weaving shed whilst he stayed here. We do not know how Neil McGugan used the space. A plan of Auchindrain drawn in 1789 shows one building on this site, with the house in the photo being a same-site reconstruction believed to date from the early 19th century, onto which McNichol then built a weaving shed. 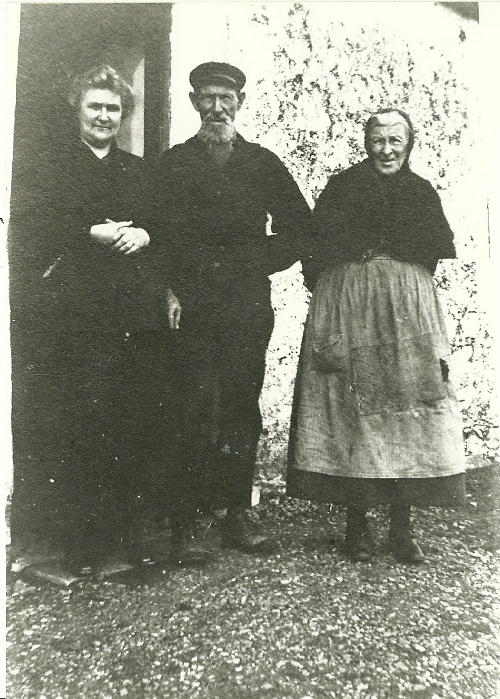