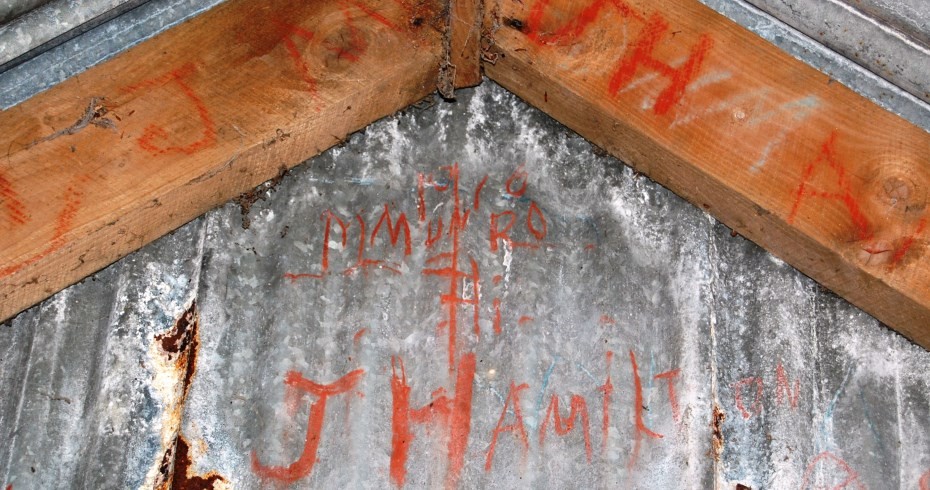 When thinking about the historic township of Auchindrain, it is unlikely that one of the first things to come to mind will graffiti. But this site actually has a hugely fascinating relationship with graffiti, and one that will change your views on the subject.

It may not be the first thing you notice when visiting Auchindrain, but whilst  living and working on site as an intern during the summer of 2019, I slowly came to notice graffiti everywhere. All over the place I began to spot the sometimes-tiny inscriptions of dates, names, and initials from previous inhabitants scratched into the insides and outsides of the many buildings’ walls. These act like little local historical trivia of the old families of Auchindrain, but why should we take notice of them?

Graffiti, particularly when it takes the form of writing or ‘tagging’[1] is considered by many people to be a form of vandalism. It’s seen as damage to property, to be quickly cleaned off or painted over. However, as an art student growing up in Cardiff, a large urban city where street art and graffiti is present on almost every corner, I have always loved it. Often created by people from marginalised communities, it is a form of self-expression that, for many, the traditional visual arts cannot match. In its less elaborate forms graffiti is a simple way of making your mark, of writing your signature and saying, ‘I was here’. In its finer forms, it is considered an artform in itself, with the work of graffiti artists such as Banksy, Keith Haring, Jean-Michel Basquiat and KAWS selling for hundreds of thousands of pounds. I have always considered graffiti to be something of great artistic and expressionistic value, such as in the photo taken earlier this year on the Millennium Walk in Cardiff. However, despite graffiti being as old as cave painting, before Auchindrain I have never before seen it as something of much historical value. 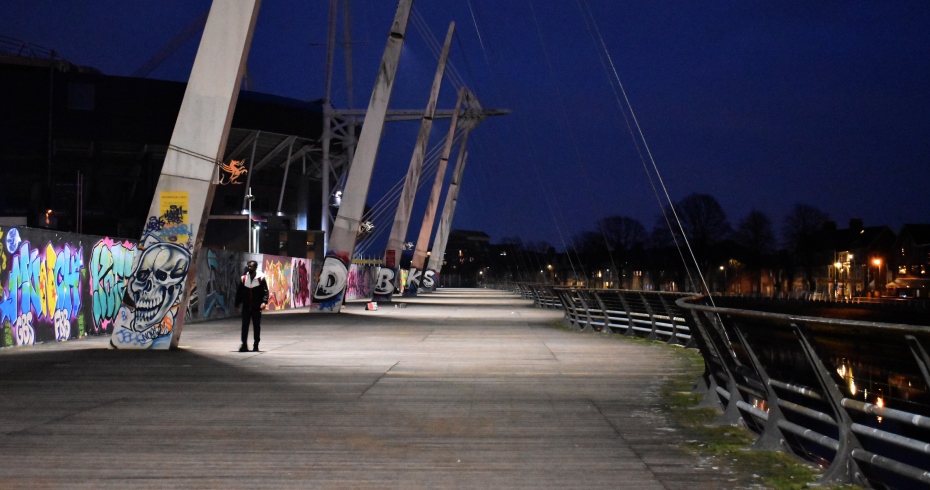 In wider historical contexts, graffiti can be used to analyse the level of literacy in historic communities where there is otherwise no record of writing. Similarly, it can be seen as a wonderful show of anti-establishment protest for underground movements.  For example, in places such as the Berlin Wall or Israeli West Bank Barrier, it easy to see the historical importance of graffiti as giving a voice to the voiceless. But what does this have to do with Auchindrain?

As a small and isolated rural farming community in the Scottish Highlands, Auchindrain as a working township was never deemed to be particularly special.  Like other such places, its history is difficult to trace. Through the centuries, very little was put in writing.  We have no diaries and very little correspondence, and key things like when a particular building was modernised information was not recorded.  This makes it difficult for historians to date things. We have limited knowledge as to when the various buildings were put up or fell into ruin, or what exactly a building was used for. This is something I learned through my summer research project to create timelines for the township’s buildings and structures.

Graffiti has a remarkable ability to help us with these mysteries. The Bull & Wool House within Auchindrain, ACHDN.K in the museum’s Recognised Collection, housed the township’s bull and was used to store the packed fleeces after clipping until they went off to the spinning factories. From the volume of graffiti it seems also to have been a gathering-place for the township’s youngsters.  In the photo we see the graffiti initials and names of the past children of Auchindrain, in the centre prominently including the inscription ‘M Munro - 1910’. This graffito was made soon after the roof had been changed from thatch to corrugated steel around 1906.  It was probably created by 16-year-old Malcolm Munro, but could just have been his 6-year-old brother Martin.  By putting his tag here, Malcolm or Martin unintentionally confirmed that the roof now in place  is that fitted around 1906, and has not subsequently been renewed: this is information we otherwise would not have had. Likewise, elsewhere within the township we know that at some point in the late 19th century The Slate House, ACHDN.E, was reconstructed.  In different places, the stonework bears the names of two people of the township, D [Duncan] Munro and his 14-year old neighbour E [Edward] Munro, with the date ‘1897’. This tells us when the work took place.

If these people of the township had not felt the need to make their mark in the place where they lived, these are facts which otherwise would have remained unknown. By simply scratching their names into a wall, or using the “keel” normally used to mark the fleeces of sheep to scrawl onto a sheet of corrugated steel, these three Munros fixed their place in the township’s history. So sometimes, graffiti is not a scourge on the landscape but a little piece of history. So let’s take a fresh look at the graffiti around our towns and think: how might this be able to help tell the stories of our communities in the future?

[1] A ‘tag’ is perhaps the most common type of graffiti, it is the simple stylized representation of the graffitist’s name