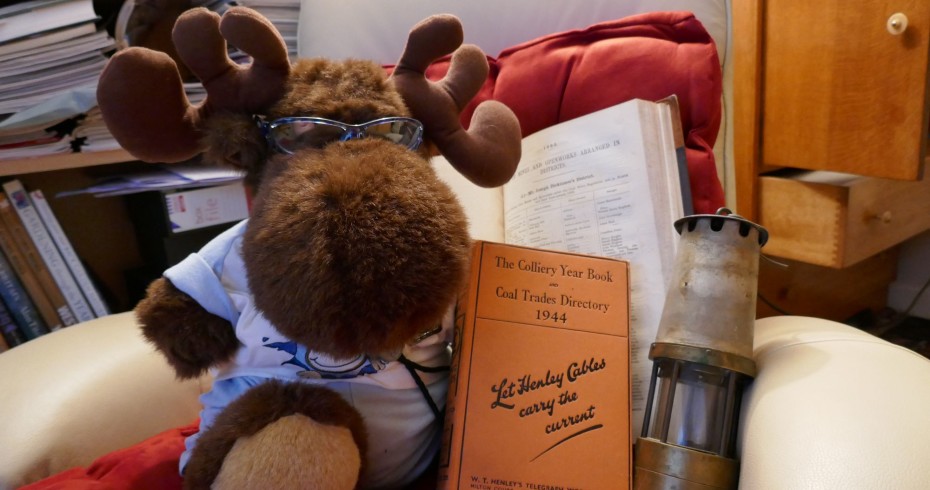 For Storytelling Week 2017 we asked our followers to tell us their #GoIndustrialStories – be that their own family’s stories, or a made up story of their own. We got a submission from Christopher of East Whitburn that is worthy of perusal.

When you're a moose, it's hard to find a miner's helmet that fits you.

Standard models don't sit comfortably between the massive blades of your antlers, and tend to settle a little skew, in a rather un-business-like manner. Christopher tried to balance a heavy helmet, complete with lamp, on each of his antlers, but this upset his sense of direction and he found himself thinking about ginger nuts for no particular reason. Inevitably he tried on a succession of kitchen containers for comedy effect; the usual range of buckets, saucepans, soup pots and colanders. His interest then moved to a dozen dainty china eggcups, perching one on each point of his mighty antlers. These made an endearing tinkling noise, but were soon dismissed as impractical for underground exploration.

Resolving to proceed without headgear, he turned his attention to his hooves. With the various chemicals he had discovered in the cupboard beneath the sink, he buffed and burnished until they reflected light like a conker. He then carefully filed and shaped all sides to give a crisp edge. He had deliberately selected a bastard-cut file from his tool box as it gave him excuse to use a rude word.

It was just before teatime yesterday, when there was nothing good on TV, that Christopher had decided to travel back into the past. Now, in the middle of the hall, the time had come to begin that journey. At first, the impact of his manicured hooves did little to bruise and scratch the surface of the cheap laminate floor, and caused a number of prized ornaments to fall from their shelves. However, he continued prancing and pirouetting on the sharp edge of his hooves with a motion he considered akin to Irish dancing, but in truth was a great deal more chaotic. Very slowly, some sort of rhythm was established, and like an old diesel engine starting on a cold day, the random bangs were gradually transformed into an ordered purr. Initial breathlessness changed to a serene detachment as his hooves were switched to an effortless autopilot. It was as if the ground liquefied beneath him, layer by layer. Soon the arm of the sofa was level with his nose and moving steadily upwards. In a neat moose-shaped shaft steady extending downwards beneath the house, a succession of interesting layers passed slowly up before eyes. He noted the tiny bones of long-dead household pets, layers of broken brick and tile dumped at the time the house had been built, the tracks of buried utilities, and a glimpse of something that might have been the holy grail. Then further downwards into the layers of the earth, he encountered seams of sandstone, limestone, shales and ironstone nodules. He reflected on an article about cyclical deposition that he once read while waiting in a police station, but soon tired of sedimentology and decided to nap as his hooves continued to cruise automatically and effortlessly downwards.

A ping like a bell in a lift rang in his head, and he realised that he had reached his destination. It was still dark, with a stony roof, floor and walls, but now there was open space in front of him, and a gentle flow of air around his nose and horns. Somewhere in the distant darkness, people were working. He could hear the impact of hammers on iron tools, the bounce of pick points and the drag of shovels. Words were being sworn softly in thick accents, while the slow deep pulse of machinery radiated down from the surface. He quickly closed his eyes to render himself invisible. On one previous occasion, an innocent miner had turned a dark corner to be confronted by the giant beaming eyes and cheesy grin of a full-grown moose. The consequences of this encounter had been most unfortunate. This time Christopher kept his mouth shut and his eyes closed.

Instead, he took a huge breath that filled every cavity of his giant snout. He sensed the mineral tangs of carbon, iron, and the products of their decomposition; the wet organic slimes of decay; the chemistry of the gasses around him; and traces of fire and exhausted air. Even above the aroma of his own poor personal hygiene, he sensed the fruity roundness and piquant complexity of the human wastes quietly deposited in the dark spaces around him. But above all, it was the sweat of toil, the juices excreted but never fully washed away, that continued to ferment after being sealed beneath the products of further labour, like layers and layers of ancient lacquer.