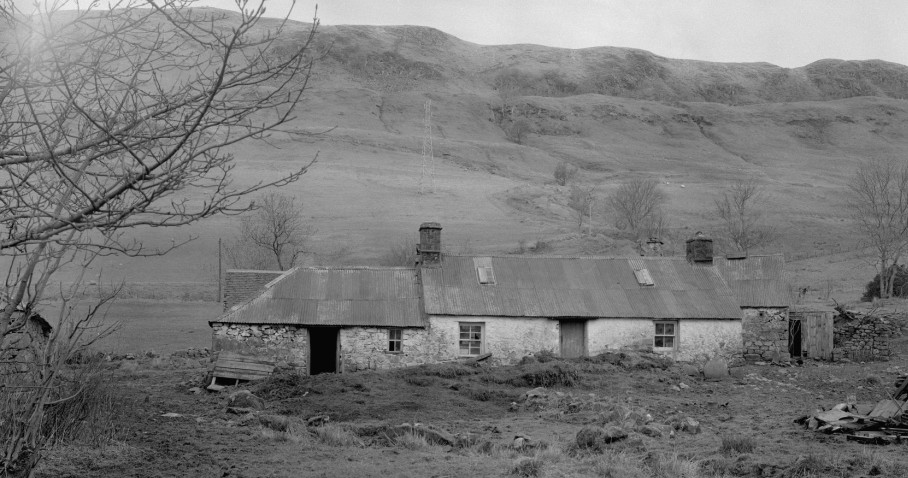 Several of the buildings at Auchindrain were originally longhouses, or byre-dwellings, where the humans and animals shared the same roof and the same doorway; the cattle would live in the downhill end (for drainage), and the humans in the uphill end. These were the typical homes of country people throughout Scotland until the late 18th century.

Most commentators were scathing about such houses, using words such as ‘wretched huts’ and ‘despicable hovels.’ Not so Dorothy Wordsworth, who toured Scotland in 1803 in the company of her brother William, and Samuel Taylor Coleridge – the famous poets:

‘This was the first genuine Highland hut we had been in. We entered by the cow-house, the house-door being within, at right angles to the outer door. The woman was distressed that she had a bad fire, but she heaped up some dried peats and heather, and, blowing it with her breath, in a short time raised a blaze that scorched us into comfortable feelings. … when I sate down in the chimney corner of her smoky biggin’ [building] I thought I had never been more comfortable in my life. A small part of the smoke found its way out of the hole of the chimney, the rest through the open window-places, one of which was within the recess of the fireplace, and made a frame to a little picture of the restless lake and the opposite shore, seen when the outer door was open. … the smoke came in gusts and spread along the walls and above our heads in the chimney, where the hens were roosting like light clouds in the sky.'

'The walls of the whole house were of stone unplastered. It consisted of three apartments, – the cow house at one end, the kitchen or house in the middle, and the spence [inner room] at the other end. The rooms were divided, not up to the rigging, but only to the beginning of the roof, so that there was a free passage for light and smoke from one end of the house to the other. … the beauty of the beams and rafters gleaming between the clouds of smoke. They had been crusted over and varnished by many winters, till, where the firelight fell upon them, they were as glossy as black rocks on a sunny day cased in ice,’

They were well looked after, and passed a comfortable night:

‘The woman of the house was very kind: whenever we asked her for anything it seemed a fresh pleasure to her that she had it for us; she always answered with a sort of softening down of the Scotch exclamation, ‘Hoot!’ ‘Ho! Yes, ye’ll get that,’ and heid to her cupboard in the spence. We got oatmeal, butter, bread and milk, made some porridge, and then departed [for a boat trip on the loch; they were cold and wet on return…] We could not prevail on the man of the house to draw near the fire, though he was cold and wet, until his wife had served us … with the whisky bottle … sugar, butter, barley bread and milk. When we had eaten our supper we sat about half an hour, and I think that I had never felt so deeply the blessing of a hospitable welcome and a warm fire.

William and Coleridge were to sleep in the barn, where the man said he had plenty of dry hay. When I went to bed, the mistress, desiring me to ‘go ben,’ attended me with a candle, assured me that the bed was dry, though not ‘sic as I had been used to.’ It was of chaff; there were two others in the room, a cupboard and two chests, on one of which stood the milk in wooden vessels covered over; I should have thought that milk so kept could not have been sweet, but the butter and cheese were good. I went to bed sometime before the family. The door was shut between us, and they had a bright fire, which I could not see; but the light it sent up among the varnished rafters and beams, which crossed each other in almost as intricate and fantastic a manner as I have seen the under-boughs of a large beech tree withered by the depth of the shade above, produced the most beautiful effect that can be conceived. I lay looking up till the light of the fire faded away, and the man and his wife and child had crept into their bed at the other end of the room.'

'[In the morning] the hostess and the rest of the family breakfasted on curds and whey, as taken out of a pot in which she was making cheese; she insisted on my taking some also; I thought it exceedingly good, and said to myself that they lived nicely with their cow: she was meat, drink and company. Before breakfast the housewife was milking behind the chimney, and I thought I had seldom heard a sweeter fire-side sound; in an evening, sitting over a sleepy, low-burnt fire, it would lull one like the purring of a cat.’