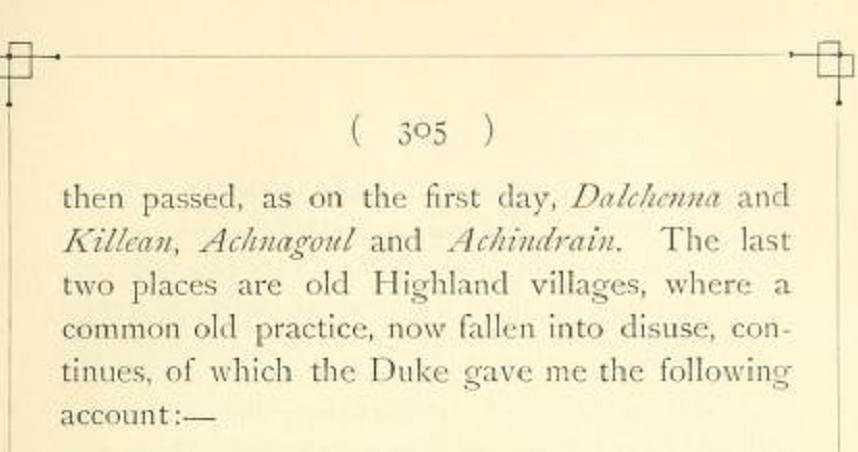 Auchindrain has been open as a museum since 1968, but the first recorded tourists came long before that, in 1875, in the persons of Queen Victoria, her daughters Beatrice and Louise, and the Duke of Argyll.

The Queen spent part of each year in Scotland.  She enjoyed getting out and about, seeing interesting places, meeting ordinary people, and writing it all down in her diaries. Two volumes of extracts from these diaries were published at the time, and were best sellers.  From the second of these, More Leaves from the Journal of a Life in the Highlands, published in 1884, we know that in September 1875 she spent a week at Inveraray Castle with her daughter Louise, who was married to the Duke’s son the Marquess of Lorne.  As one can imagine, Louise, Lorne and the Duke worked hard to entertain the Queen during her stay.  On morning of 25th September the Queen visited an old woman in Inveraray who had known Lorne as a child, and later they went out in the wagonette.  As well as a pleasant excursion on a “fine and bright” afternoon, the objective of the drive seems to have been for the Duke to show the Queen the two “primitive villages” which survived on his estate: Achindrain (as it was often written up to the 1930s), and the now long-abandoned Achnagoul, nearby.

We don’t know if, at “Achindrain”, they stopped for the Queen to walk around and meet people as she often did, or to get out her ever-present sketch pad and draw.  We do know that during the drive the Duke explained to the Queen the operation of runrig, the traditional land tenure system of the townships. He described “the old rude practice” of drawing lots for “the patches of arable land into which the farm was divided”, noting that “this very rude system is quite incompatible with any improved culture, but is an extremely ancient one”.  He went on to say that around 1847 “the families were persuaded with much difficulty to give up this old semi-barbarous system and to divide the arable land into fixed divisions one being assigned to each tenant, so that he could cultivate on an improved system”.  All of this went later to the Queen in a written note from the Duke, which she pasted into her diary, concluding the section with the comment “These are said to be the only two villages of the kind in existence in the Highlands. The inhabitants are very exclusive, and hardly ever marry out of their own villages”.  A thought-provoking comment indeed, from a 19th century European monarch!

We get three things from this.  The first is to show that the status of Auchindrain as a rare and unusual survival wasn’t something discovered new in the early 1960s, but had been known and understood long before that. Why otherwise did the Duke take the Queen to see these “primitive villages”?  The second is the immense value of the Duke’s contemporary explanation of the changes that took place on the 1840s in helping us to understand the landscape of Auchindrain as it now is.  We have the remains of the “fixed divisions … assigned to each tenant”, and can see traces of the “(cultivation) on an improved system” these made possible.  From the Duke’s account in the Queen’s diary, we know what happened, why and when. Thank you, Your Majesty, and thank you, Duke George.

The third thing we get from this is that amongst the museums that make up Go Industrial, Auchindrain was perhaps the first to have been honoured by a Royal visit.