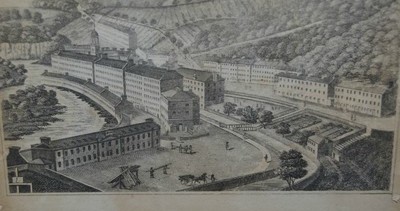 The New Lanark Collection includes this original label from 1818 which was used for export of cotton yarn to Russia.

The Russian market was opened up by Robert Owen early on after his arrival in New Lanark in 1800, using the advantage of the Forth and Clyde Canal to export across the North Sea into the Baltic at a time when peace had returned in northern Europe.  The sales books show that exports through St Petersburg were significant.

By 1818, Owen had completed, a couple of years earlier, his major communitarian projects for the village in the Institute for the Formation of Character and the School and wanted to show his model industrial community to the world.  The many eminent visitors to New Lanark included Grand Duke Nicolas of Russia, the brother of the Emperor, who himself was to become Emperor Nicolas I in 1825.  The Duke made his visit as part of a tour of Britain and, according to Owen’s autobiography, was recommended to visit New Lanark by his mother, the Grand Duchess Maria Feodorovna.

Part of Owen’s strategy for promoting both his products and his social principles was the commissioning of his resident art teacher, John Winning to make a series of images of New Lanark showing the splendour of the village in its setting.  The label was an original drawing by Winning done at the same time in 1818 for general use but in this case the text has been translated into Russian for export.

Each 10lb. bundle of yarn from New Lanark had a label with a print of the mills and became recognised by foreign buyers as “Picture Yarn”.

The bulk of New Lanark’s home sales were done through the Glasgow yarn market while still maintaining sales throughout Britain to places as far apart as Dublin and Norwich. New Lanark cotton was also sent all over the world to places such as Holland, the Baltic, and Russia with the majority of sales made in Amsterdam, Elberfeld, and St. Petersburg.